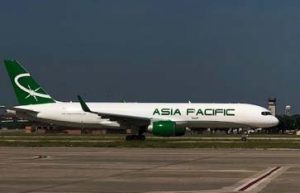 Guam-based Asia Pacific Airlines’ third 757-200PCF (25140, ex-OpenSkies) arrived in Honolulu (HNL) on Sunday and has started conformity inspections with the Federal Aviation Administration (FAA). The airline told Cargo Facts that it is expecting the aircraft to be able to enter service next Friday.

Unit 25140 completed conversion with Precision Aircraft Solutions at the Flightstar facility in Jacksonville (VQQ) and was redelivered last month [FAT004931], after which it was flown to Fort Worth (FTW) to be painted in an updated livery. It then went to San Antonio (SKF) for a number of tech mods and upgrades, including a flat panel display system in the cockpit.

Asia Pacific Airlines is now ready to complete the renewal of its freighter-only fleet. The carrier has a single 727-200F left (22462) which it plans to retire by the end of this year. The three 757Fs, in combination with the airline’s ETOPS 180 certification, make non-stop flying between HNL and Guam (GUM) possible. Asia Pacific Airlines previously told Cargo Facts that the aircraft will also operate ad-hoc charters from GUM to destinations such as Hong Kong (HKG) and Macau (MFM).

The carrier is likely to continue looking at opportunities to grow its fleet further, either with more 757s or, potentially, 767s.