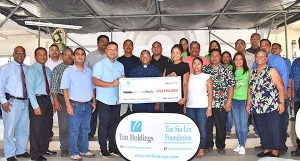 TanHoldings and its charitable arm, Tan Siu Lin foundation showed their support to the Tinian community by donating a total amount of $100,000 to the typhoon-struck island. TanHoldings and the TSL Foundation aim to help the people of Tinian to rebuild the San Jose Social Hall and church that were heavily damaged when super typhoon Yutu hammered the island October last year. The project is estimated to cost between $300,000 and $500, 000 and the rebuilding of the church would amount to $1.7 million.

Given the longstanding relationship of TanHoldings with the Tinian community, they readily extended their help to spearhead and sustain the rebuilding of the San Jose Social Hall. They are the first group to donate to the reconstruction. They are also seeking help from their partners from Guam to give aide to the said project.

“When we split the donation among CARE CNMI, American Red Cross-NMI Chapter, Mass Care, and other affected groups, there was $100,000 left and we decided to hold on to it. Now, we know why we kept the $100,000—it has a purpose, to help the people of Tinian,” President and Ceo Jerry Tan said.